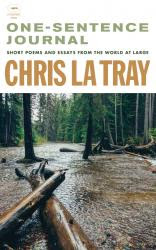 One-Sentence Journal: Short poems and essays from the world at large by Chris La Tray
One Sentence journals have been popular for several years. It is a way to put personal observations about your day, your life, your feelings into one sentence.  Chris LaTray shared his one-sentence journal on a blog. Here are entries from the beginning of February:

02/01/2018: Afternoon on a patio in the desert, warm with a cool breeze, eyes closed, the buzz of hummingbirds around my head, and I hope my critical moments of solitude aren’t construed as me being rude.
02/02/2018: Cruising old haunts in Tucson, driving with the windows down after dark.
02/03/2018: North from southern Arizona on Highway 77, the sun rising from behind the Catalina Mountains, a red-tailed hawk, in silhouette against the moon, perches atop a gigantic saguaro.
02/04/2018: The preponderance of crows and ravens as I traverse Utah makes me realize there is more crafty personality resident here than I may have otherwise expected.
02/05/2018: Twenty miles west of Butte the temperature suddenly drops 15° and transforms a smooth, fast interstate into an icebound death zone, with dry, light snow blowing hard and horizontally across all lanes so that the driving surface is hardly even visible.
02/06/2018: I woke sluggish and cranky, those sensations dogging my every footstep … but the morning coffee, after days of roadside convenience store swill, was delicious.

These insights into his daily life were shared on his blog, then he went one step further and took those sentences to write poems and essays, which became a book.   I have researched the background of one-sentence journals because I think people of all ages could benefit from this form of writing exercise.  I also think readers will enjoy getting to know more about Chris LaTray in his new book.
Here is my blurb published in the book:
A book is written one sentence at a time so it seemed only natural that Chris LaTray’s One Sentence Journal would grow from a blog into a collection of short poems and essays. These pages talk of bluebird mornings, an ominous red moon, thick frost and life with Darla the adventure dog—all giving insights into one man’s reflections on nature and his role in staying alive in the moment. Warning---as Chris takes you season by season through his life, you will become more aware of your own surroundings and may start writing your own random thoughts. Reflections and sharing seem to be just what the world needs right now, so read and begin.

The honor books are:

The Flicker of Old Dreams: A Novel by Susan Henderson
Mary Crampton has spent all of her thirty years in Petroleum, a small Montana town once supported by a powerful grain company. Living at home, she works as the embalmer in her father’s mortuary: an unlikely job that has long marked her as an outsider. Yet, to Mary there is a satisfying art to positioning and styling each body to capture the essence of a subject’s life.
Though some townsfolk pretend that the community is thriving, the truth is that Petroleum is crumbling away—a process that began twenty years ago when an accident in the grain elevator killed a beloved high school athlete. The mill closed for good, the train no longer stopped in town, and Robert Golden, the victim’s younger brother, was widely blamed for the tragedy and shipped off to live elsewhere. Now, out of the blue, Robert has returned to care for his terminally ill mother. After Mary—reserved, introspective, and deeply lonely—strikes up an unlikely friendship with him, shocking the locals, she finally begins to consider what might happen if she dared to leave Petroleum.
The Flicker of Old Dreams explores themes of resilience, redemption, and loyalty as it shows a love of a place and its people. 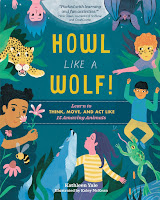 Howl like a Wolf!: Learn to Think, Move, and Act Like 15 Amazing Animals by Kathleen Yale,  Illustrated by Kaley McKean
What does it feel like to “see” with your ears like a bat or go through a full body transformation like a frog? Can you wriggle in and out of tight places like an octopus, camouflage yourself like a leopard, or do a waggle dance like a honeybee? This creative and beautifully illustrated interactive guide makes learning about animals fun for children ages 6 and up. Fifteen animals explain their amazing feats and invite kids to enter their world by mimicking their behavior — an imaginative approach to learning that fosters curiosity, empathy, and dramatic play.

The Traveling Feast: On the Road and at the Table with My Heroes by Rick Bass    Now at a turning point--in his midfifties, with his long marriage dissolved and his grown daughters out of the house--Bass strikes out on a journey of thanksgiving. His aim: to make a memorable meal for each of his mentors, to express his gratitude for the way they have shaped not only his writing but his life.
The result, an odyssey to some of America's most iconic writers, is also a record of self-transformation as Bass seeks to recapture the fire that drove him as a young man. Along the way we join in escapades involving smuggled contraband, an exploding grill, a trail of blood through Heathrow airport, as well as heartwarming and bittersweet final meals with the late Peter Matthiessen, John Berger, and Denis Johnson. The Traveling Feast is an adventure in identifying and thanking people in ways that nourish and renew the spirit of friendship.
I loved reading about the travels, the meals and the conversations with writers that are familiar to me and I salute Rick’s notation and continuation of mentor-ship. One gains much through sharing food and wine!

Warblers & Woodpeckers: A Father-Son Big Year of Birding by Sneed B. Collard III
A humorous, light-hearted account of a father and son’s “Big Year” traveling across the country and abroad on a birdwatching quest
Writer Sneed Collard and his son Braden set out to establish their own personal Big Year bird species count record. In Warblers & Woodpeckers, Sneed shares the excitement, challenges, perils, and insights that come with crisscrossing the country in search of some of Earth’s most remarkable creatures. It’s a father-and-son tale, in which the adventure is in the journey and the surprising discoveries and encounters with our wondrous feathered friends. Sneed brings a fast-paced yet generous voice to the attempt, and readers of all stripes will appreciate the way backyard birders can create their own Big Year.

This year's winners will be honored on April 10th with a reception at Lewis and Clark Public Library from 6:00 to 8:00pm.
The award is sponsored by The Friends of Missoula Public Library and Fact & Fiction with a formal presentation during the Montana Library Association Conference.
at April 07, 2019
Email ThisBlogThis!Share to TwitterShare to FacebookShare to Pinterest

Book Bound with Barbara
I recently retired after 45 years of bookselling. Independent businesses, libraries, books and reading are an important part of my quality of life. I wanted to write a blog so that I could continue to recommend books, share part of my life and hopefully enrich your reading pleasures.